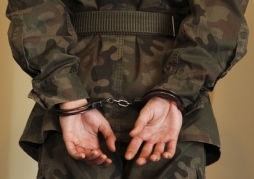 The No Offence! summer conference at HMP Oakwood will focus on the increasing number of ex-military personnel entering the criminal justice system.
Following on from our widely publicised conference in 2012, the production of Battle Scarred: Soldiers Behind Bars by award-winning filmmaker Chris Terrill, is about to hit the headlines and raise awareness that many thousands of service personnel will enter ‘civvy street’ over the next few years with the suggestion that a worrying percentage of those could enter the criminal justice system.
http://www.radiotimes.com/episode/v4mkb/battle-scarred–series-1—1-battle-scarred-soldiers-behind-bars
« SOLDIERS BEHIND BARS (2×60)

The number of ex-servicemen in our prisons is increasing. In fact military veterans now constitute the largest occupational group in the British prison system.

Psychiatrists and criminologists are battling to understand this worrying trend that some say it is just the tip of an iceberg. So why do ex-servicemen run a greater risk of falling foul of the law? Is it the brutalising effect of war, the hardened self-image, the macho do-or-die ethos, the predisposition to confront a threat? Is this why most ex-servicemen in jail or on probation have committed a violent crime or a sexual crime?

Chris Terrill, the only military trained documentary maker in Britain, immerses himself in the often sad and lonely world of the veteran to investigate this worrying phenomenon. What he finds is both shocking and surprising. Produced, directed and filmed by Chris Terrill.

Chris Terrill has told thenextposting.com that the final two programmes in the series are yet to be scheduled by Channel 5, but should be aired later this year.

http://www.thenextposting.com/2013/04/channel-5s-battle-scarred-episode-one-soldiers-behind-bars/
http://en.wikipedia.org/wiki/Chris_Terrill
Do we need Veteran Treatment Courts in the UK?

Is violent offending among UK military personnel a problem?

Does the current situation fly in the face of the military covenant?

Who is responsible when service personnel are discharged? Are they given adequate resettlement back into the community? Does the current situation fly in the face of the military covenant?
These questions and more will be debated by presenters throughout the day

Presenters will explain the important facts and issues associated with this emotive and misrepresented group.

This will be your opportunity to feed into this debate, so please do come and join the conversation.
http://www.no-offence.org/showthread.php/7529-Conference-Information?p=9105#post9105